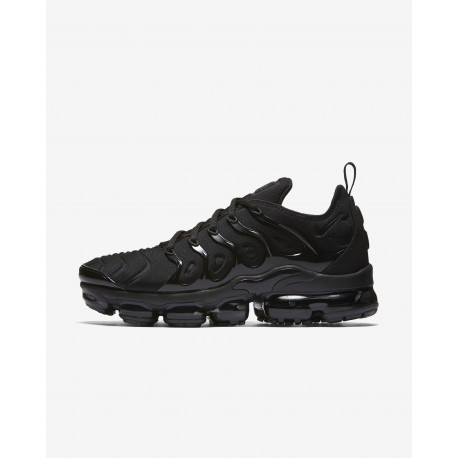 With a reinvented cushioning system, the Nike Air VaporMax Plus Men's Shoe delivers a lightweight, bouncy ride for a gravity-defying sensation underfoot, while the throwback molded upper gives you a snug, comfortable fit.

With a reinvented cushioning system, the Nike Air VaporMax Plus Men's Shoe delivers a lightweight, bouncy ride for a gravity-defying sensation underfoot, while the throwback molded upper gives you a snug, comfortable fit.

The Air VaporMax represents a new era in Nike innovation. “It’s changed our whole philosophy on how we design for Air,” says Cushioning Innovation Designer Zachary Elder. With the VaporMax, the designers wanted to truly capture the feeling of ‘running on air.’ The designers started by restructuring the Air unit so they could attach it directly to the upper. “That was the biggest challenge,” says Tom Minami, Senior Footwear Designer – but it was worth it. “Without any midsole or sockliner, you get to feel the Air in a whole new way.” In previous Air Max models, the goal was to fill the sole with as much Air as possible, but with the VaporMax, the focus is on using the Air efficiently. “As you step down, each lug gets pushed into the Air unit, ramping up the pressure,” Elder explains. “As you step off, the pressure releases, creating that springy bounce.” After the seven-year journey from ideation to release, Elder and Minami are excited for what’s to come. “I’m super proud of the product," Elder says. “This new approach is going to be a huge turning point for Air – and for Nike.”

Nike's revolutionary Air-Sole unit made its way into Nike footwear in 1978. In 1987, the Nike Air Max 1 debuted with visible air in its heel, allowing fans more than just the feel of Air-Sole comfort—suddenly they could see it. The Nike Air Max franchise would go on to own the '90s with a succession of now-iconic releases. In 1998, the Air Max Plus introduced a cushioning system that "tuned" Air-Sole units to specific parts of the foot. This gave runners a more stable stride, but the shoe's unique look earned it an influence beyond any performance benefit. Its sunset colorways and wavy design lines, inspired by wind-blown beachscapes, garnered a cult-like following of sneakerheads that grew into a cultural phenomenon.

22 other products in the same category: